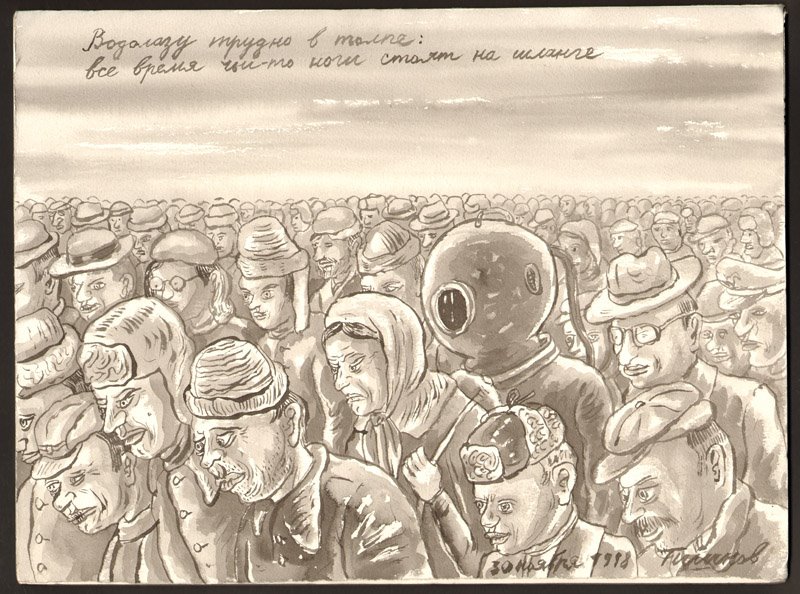 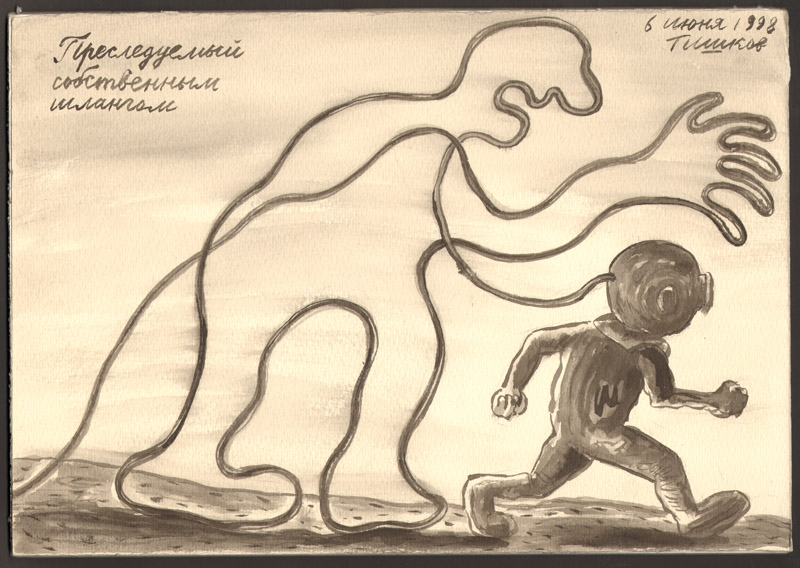 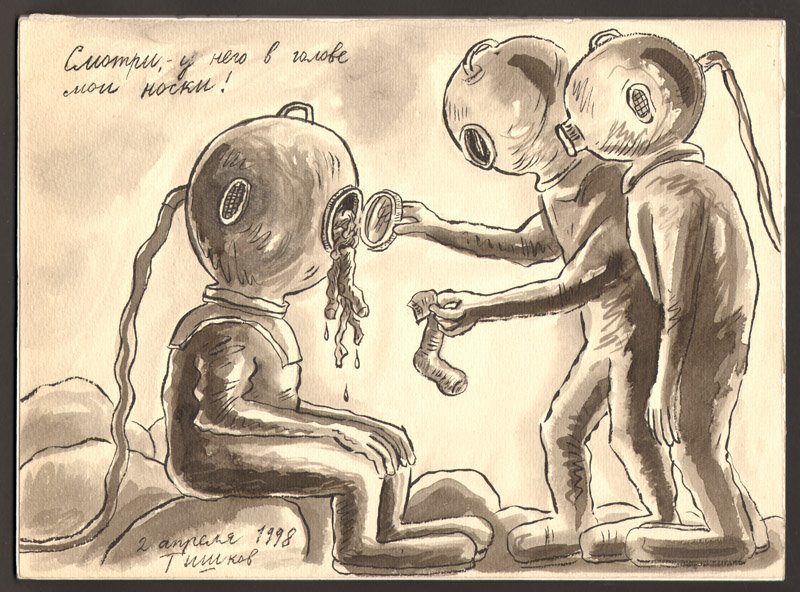 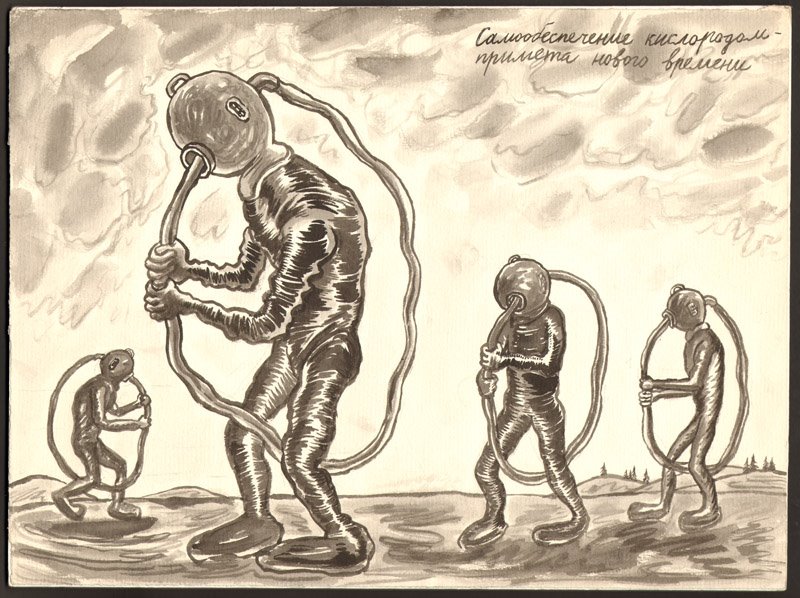 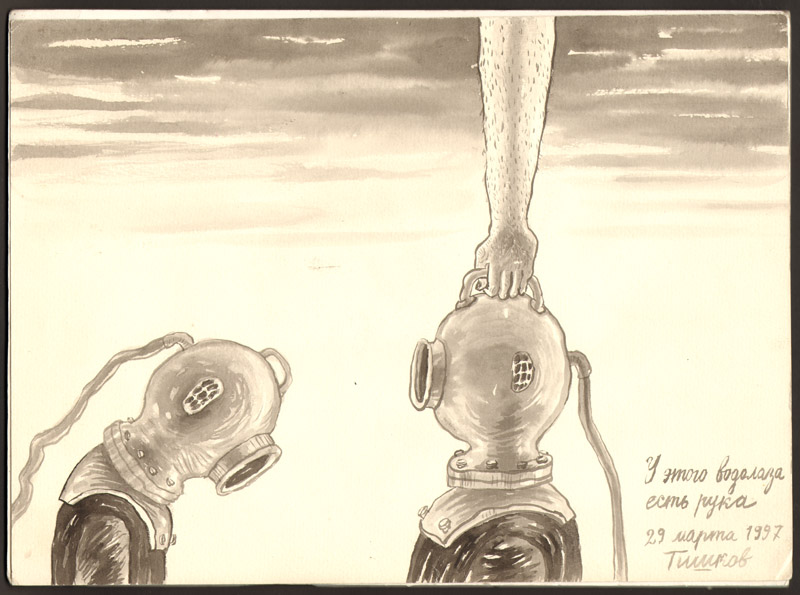 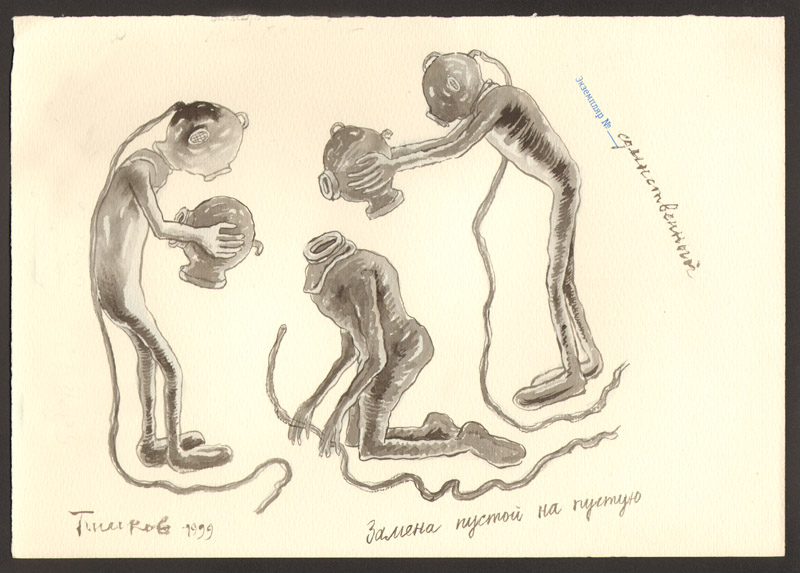 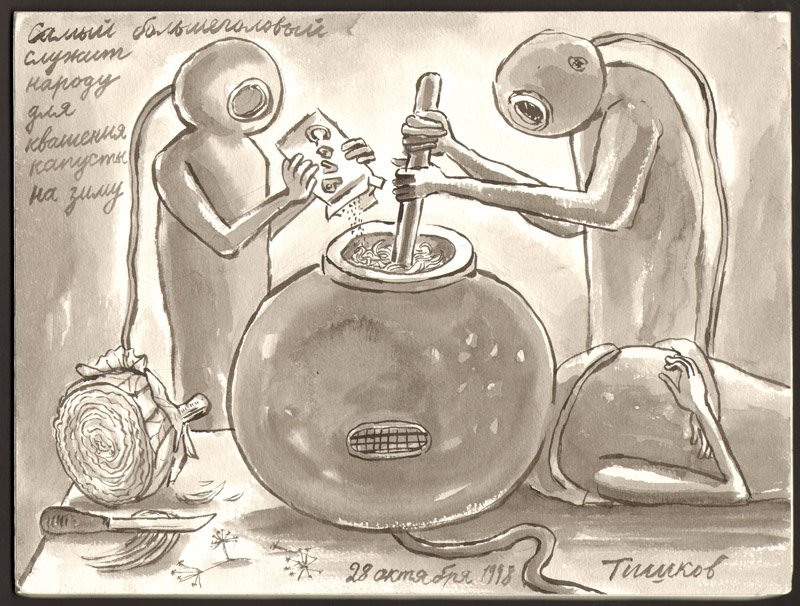 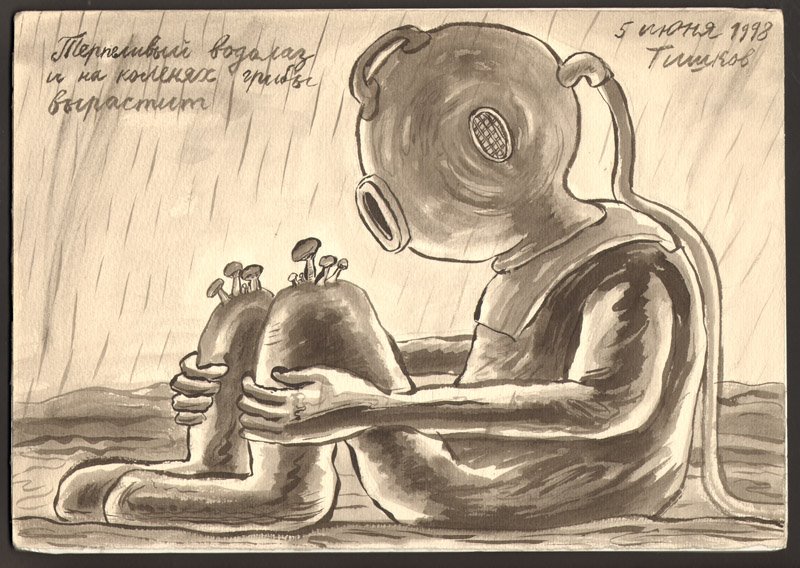 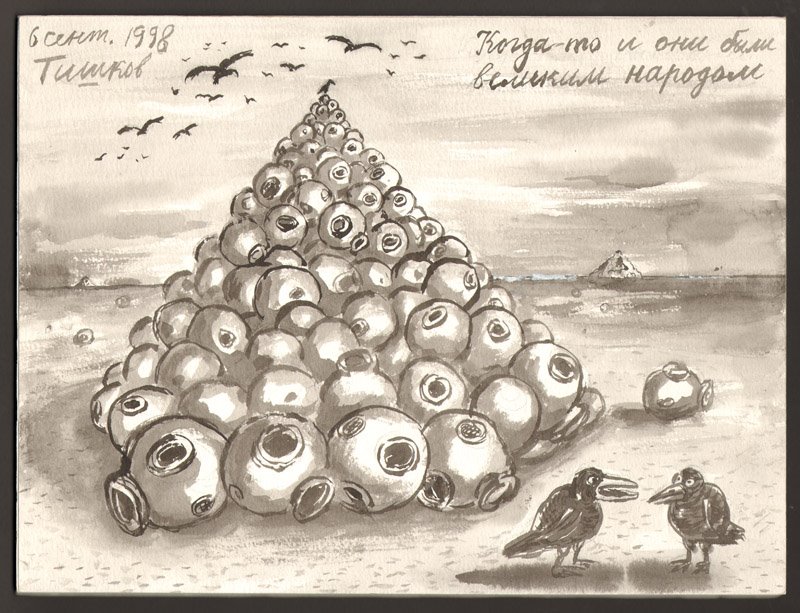 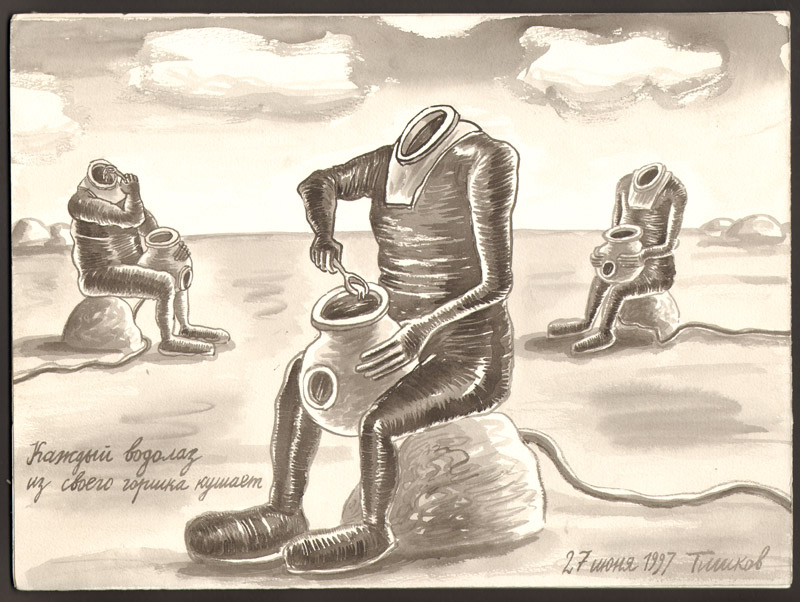 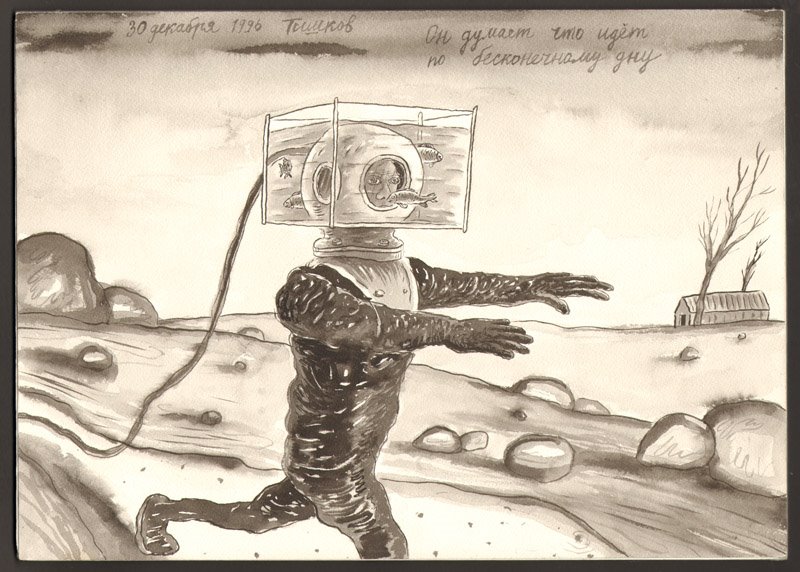 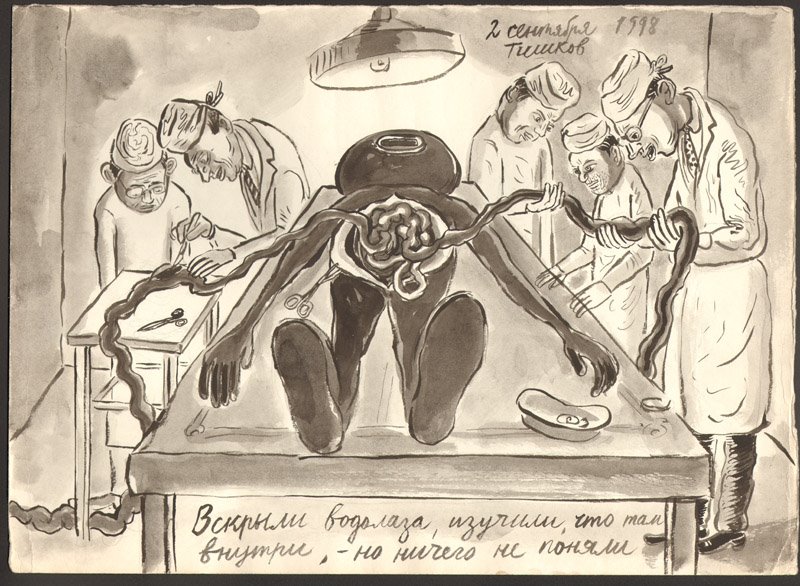 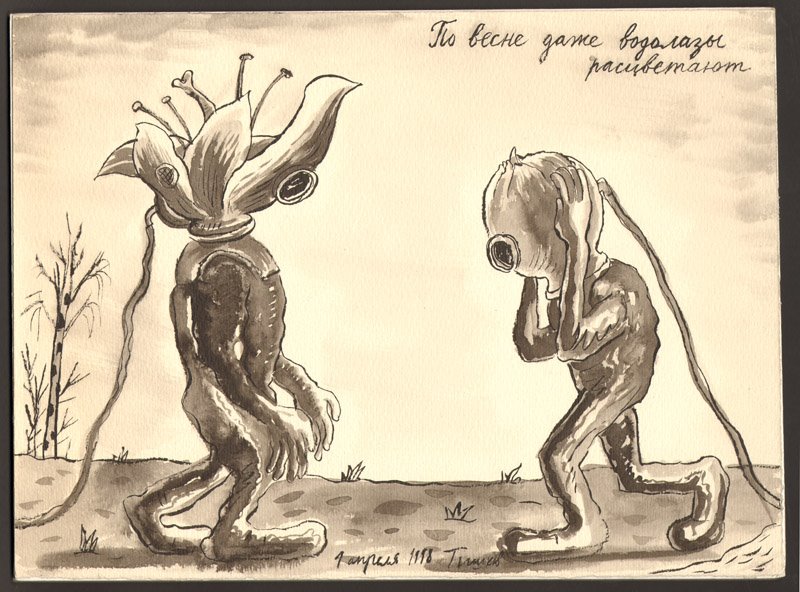 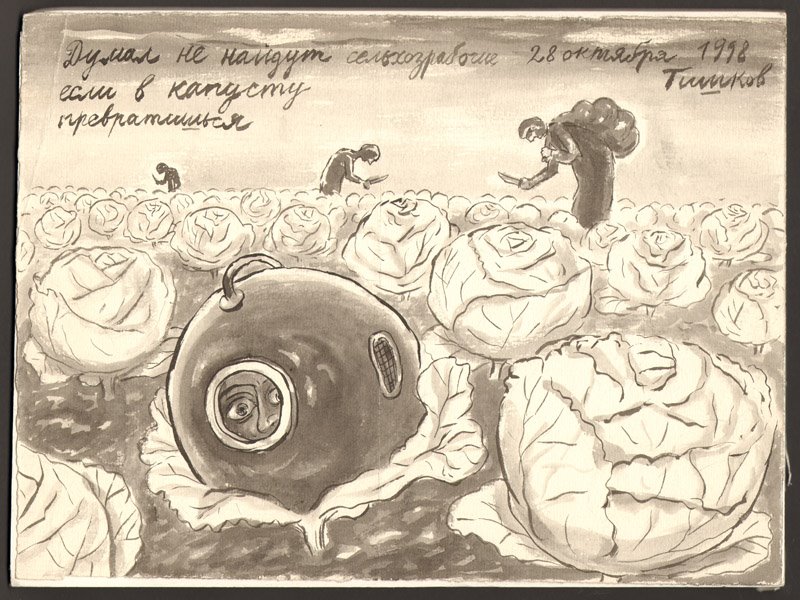 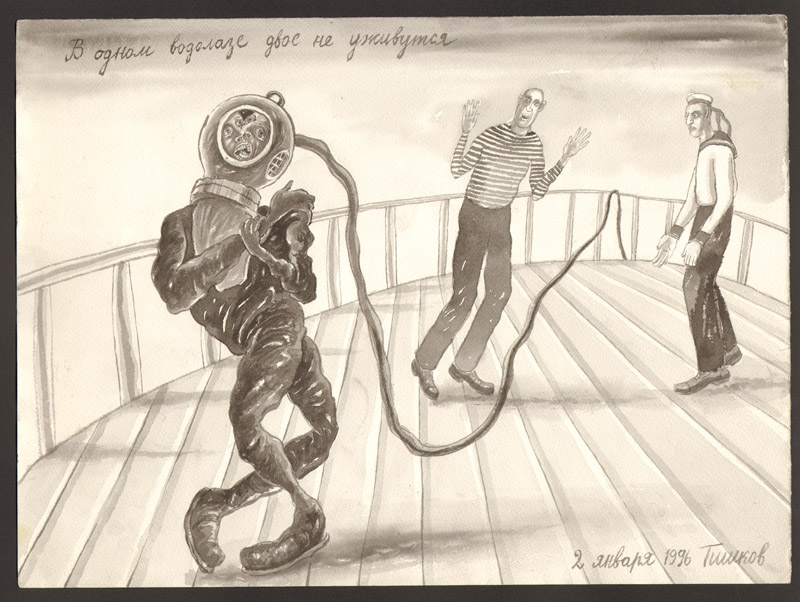 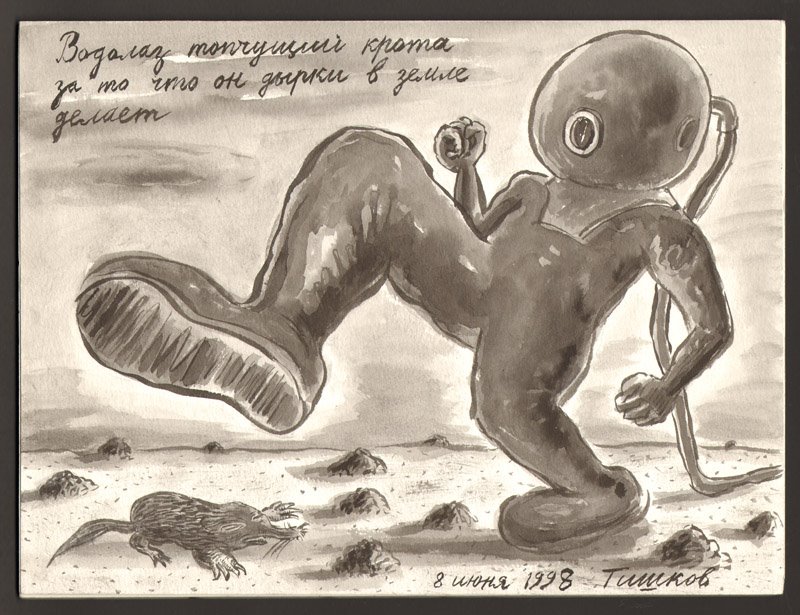 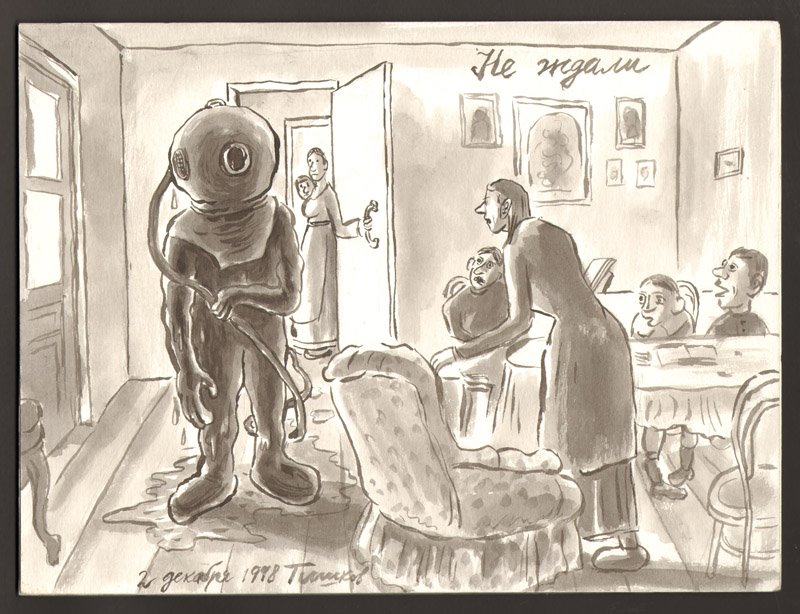 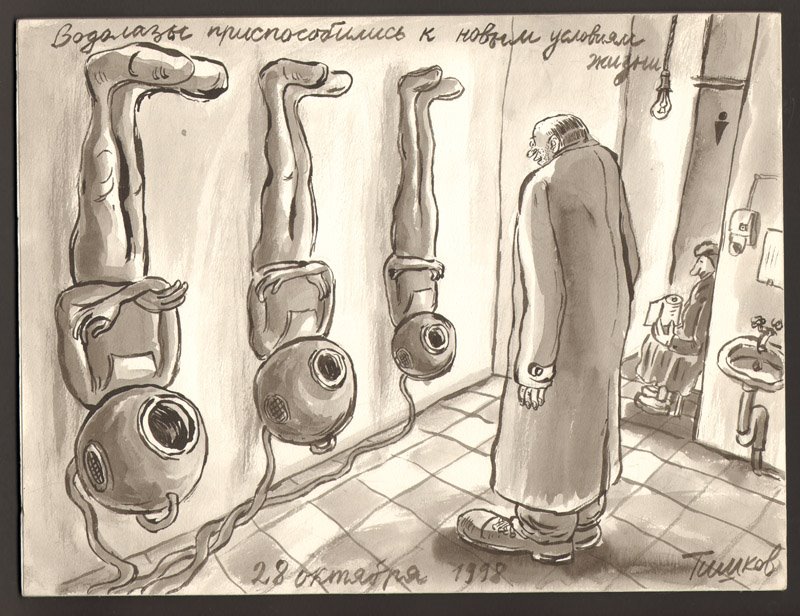 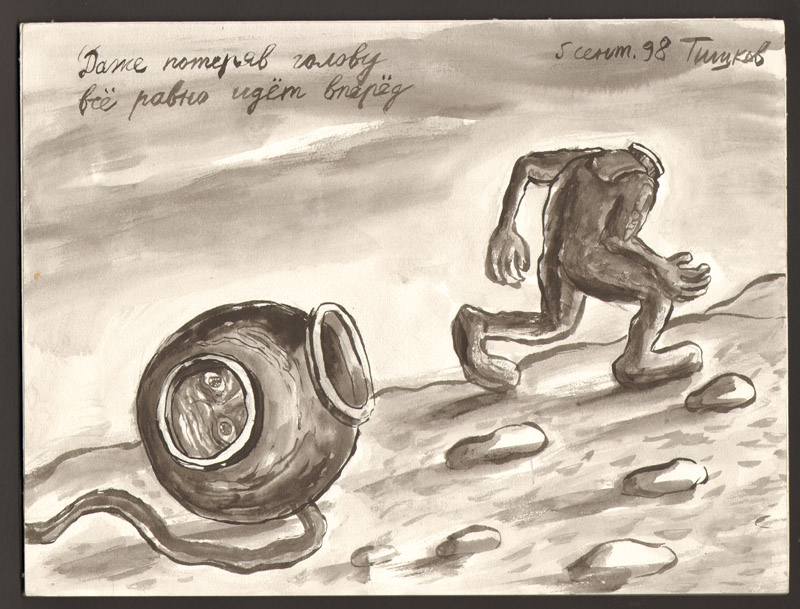 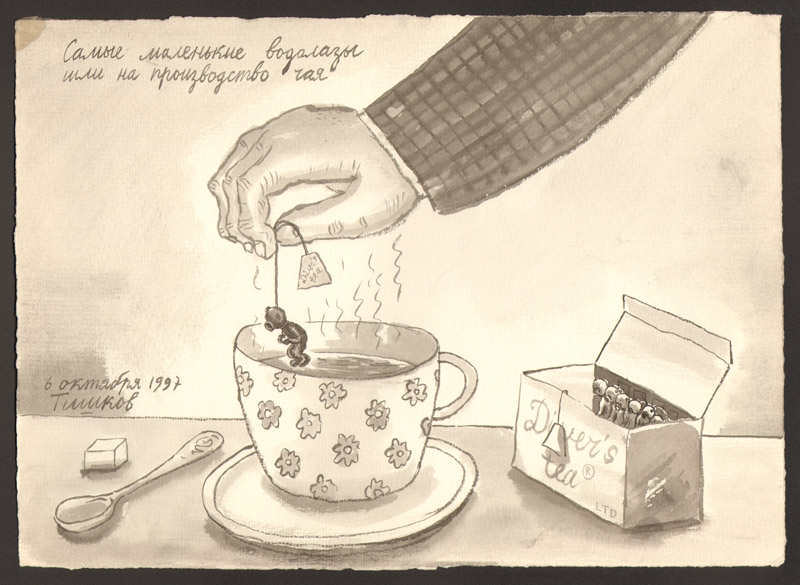 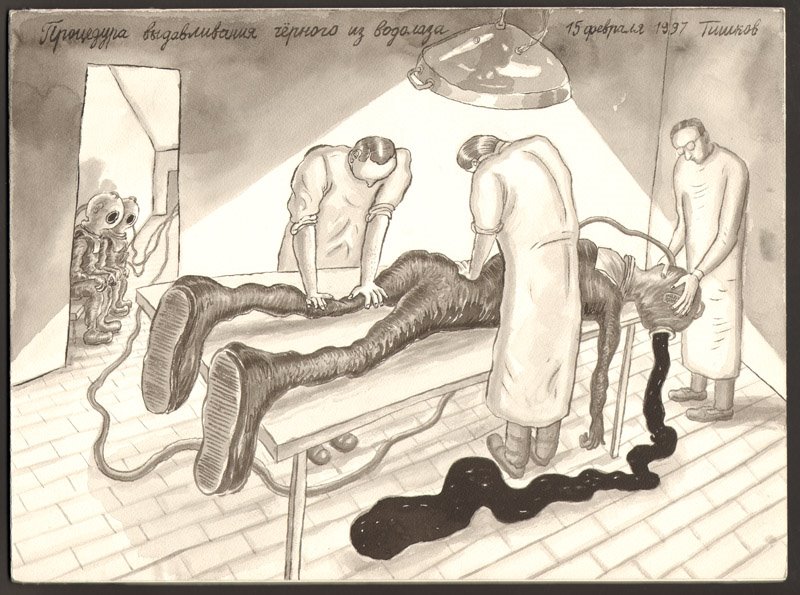 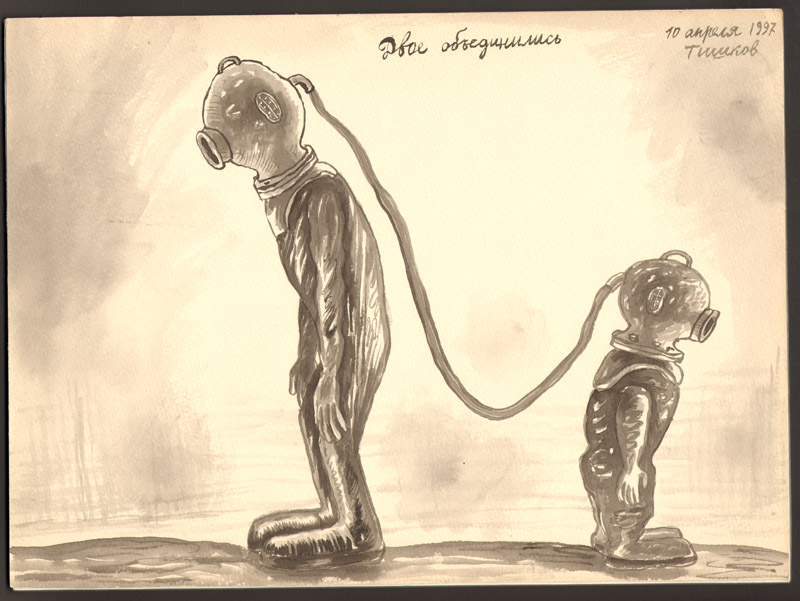 When communism fell back in 1991, Russian artists lost their favorite
target -- and the central focus of their work. These days, confronted with
a squishy democracy, artists are turning out personal, narrative works --
stuff that would have been squashed by the old regime.
"Now that the Soviet Union is over, artists are trying to recapture a
sense of what it means to be Russian," explains area printmaker Dennis
O'Neil. He should know -- for the last decade, he's presided over Russian
American artist exchanges through the Moscow Studio project and, more
recently, his Hand Print Workshop International in Alexandria. Many
artists, he says, have responded by "inventing personal mythologies."
You'd be hard-pressed to find a better -- or more literal -- example of
the recent fixation on legend than the drawings of Moscow artist Leonid
Tishkov. For more than 10 years, the 47-year-old artist has drawn scenes
from the lives of his kooky vodolazes (deep-sea divers) -- over and over
again. Although many of his drawings and screen prints speak to
particulars of the Russian psyche, his show "Vodolazes," on view now at
the District of Columbia Arts Center in Adams-Morgan, isn't just a course
in cultural anthropology. Many illustrate psychic conundrums most everyone
will find familiar.
Why the single-minded devotion to soggy heroes? "I use to explain
different social and psychological problems," Tishkov tells me in
fragmented English. "For me, deep-sea diver is a form of language. The
pictures are like parables, or poems."
Call them odes to discomfort. These divers aren't suited up in the latest
Lycra freedom fabric; their outfits haven't been high tech since Jules
Verne published "20,000 Leagues Under the Sea." These are bulky diving
suits capped by bulbous metal helmets punctuated by tiny glass faceplates
and oxygen tubes that trail off beyond the drawing's frame like some
cosmic umbilical cord. According to Tishkov's lore, vodolazes are the
delicate subconscious requiring shelter from psychic pain; their suits
protect them from the hostile environment of daily living.
Sounds like the stuff of frothy soap operas. Thankfully, Tishkov's surreal
humor takes the edge off the melodrama. In the 40-odd India ink drawings
in this show, he's put his divers in all sorts of wacky situations -- some
absurd, where stick-straight vodolazes float through the air like autumn
leaves; others show them acting like watery gremlins, goofing off in
someone's bathtub. Like his hero, macabre cartoonist Charles Addams,
Tishkov has created his own breed of mostly harmless -- but undeniably
weird -- monsters. And like Addams, his style is illustrative, too --
characters are outlined and filled in with washes of gray and occasional
splashes of color. The drawings are then captioned in Russian in Tishkov's
shaky script, and translated to English below in neat gray type. The
prints, presented on DCAC's walls in groups of 12 or 15, could be a suite
of New Yorker cartoons.
These drawings may look like comics, but they act like shrinks. Prints
such as "He thinks that he's walking along an endless seabed," in which a
vodolaz sleepwalks across a rocky countryside with his head stuck in a
fish tank, point out prickly psychic conundrums. It's a vision of
single-mindedness, that, according to the artist, is a particularly
Russian predilection.
For the most part, Russia's woes are the same as most everyone's. "Russian
and American looks different only on the outside," Tishkov says. The
artist knows this much from experience -- he went to medical school before
becoming an artist. Although he quickly traded scalpel for paintbrush, he
left medicine figuring that if the innards are the same, so is the psyche.
Those bulky wet suits are just window dressing, he says. "When open window
for deep-sea diver, it's the same."
Despite Tishkov's pluralist intentions, a number of his drawings end up
lost in translation. Even with the artist as cultural tour guide, I didn't
get the image with a birch tree growing out of the diver's helmet. The
piece is supposedly a riff on Russian nationalist fervor (the birch being
the Russian state tree).
Sometimes not getting the joke is the whole point. One drawing has a big
vodolaz, fat and happy under an umbrella during a rainstorm; two
littlevodolazes crouch up top, shivering as they get pelted. The caption,
"The little Vodolaz up top is soaked through, but the big one underneath
is as dry as can be," seems obvious enough. Turns out the duh-factor is
intentional: Russians accept inequality unblinkingly. Class stratification
is as unremarkable as a weather report.
Tishkov's images add up to a portrait of Russian society taken from a
decidedly unflattering angle. The handful of divers sitting on rocks
looking down at their feet while "Waiting for the Flood" might as well be
expecting Godot.
These divers are good-natured, but weary and slumbering. Tishkov shows us
a society making do with the oldest technology -- and drowsy from lack of
oxygen.