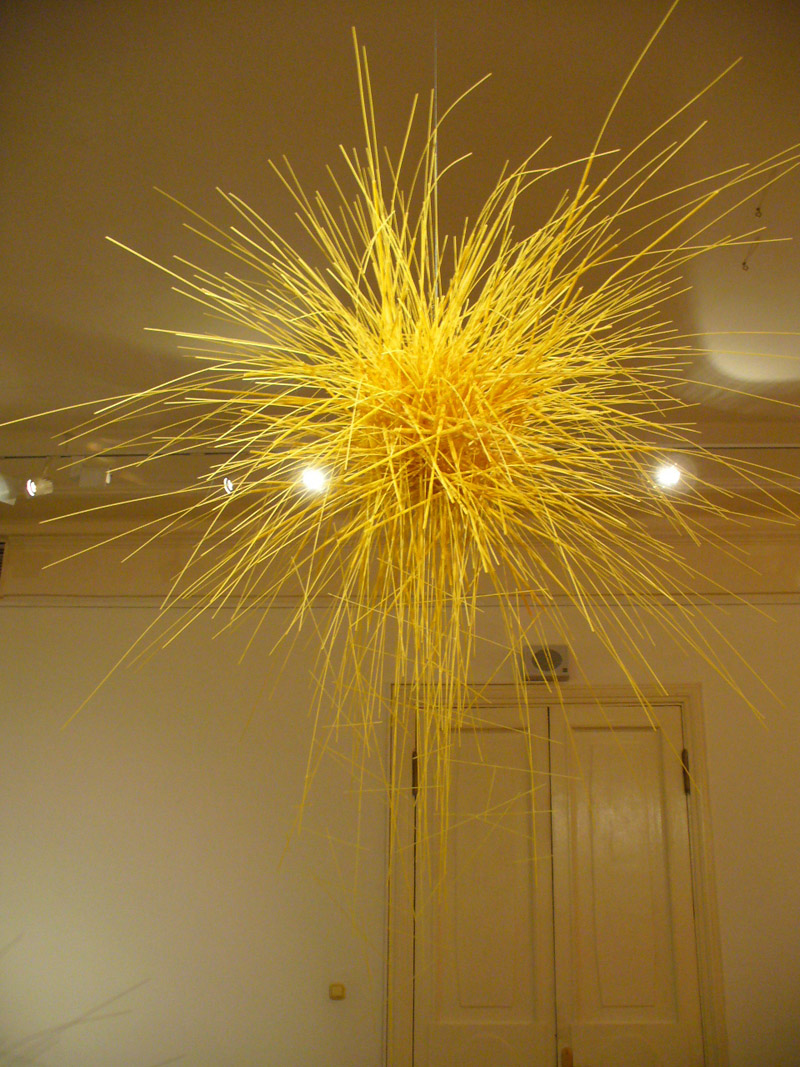 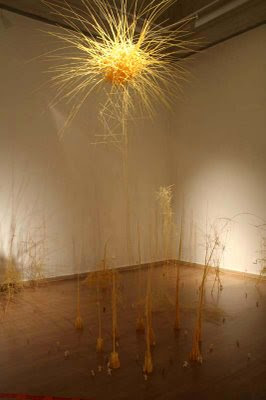 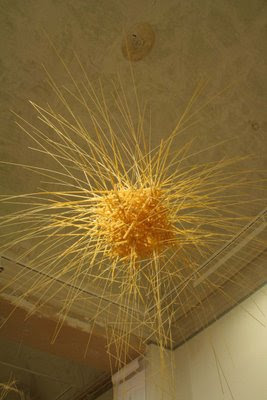 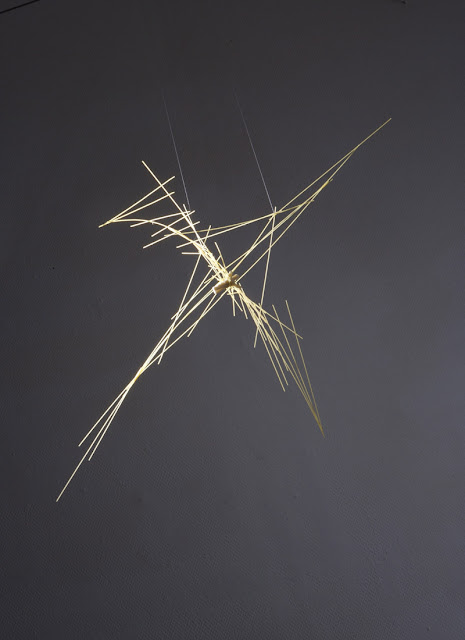 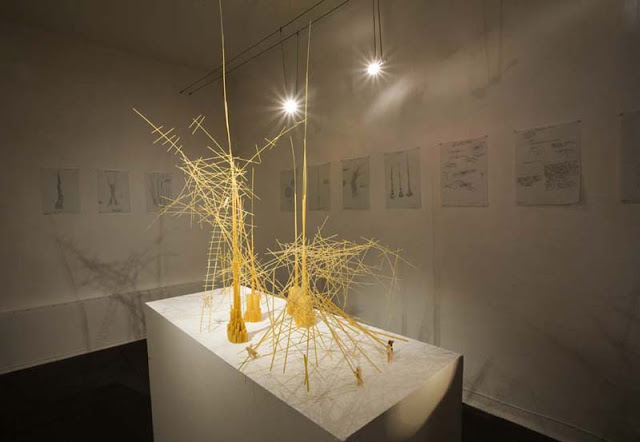 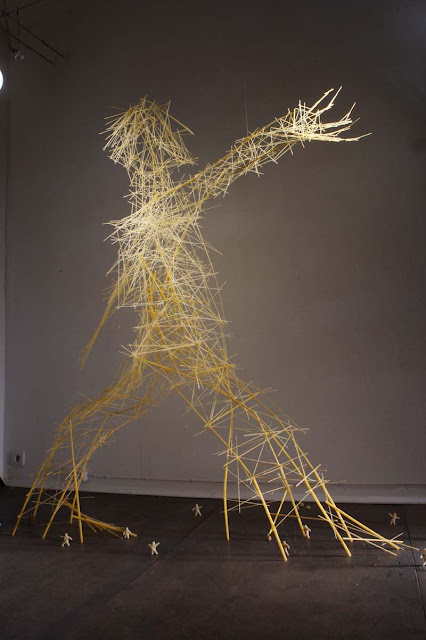 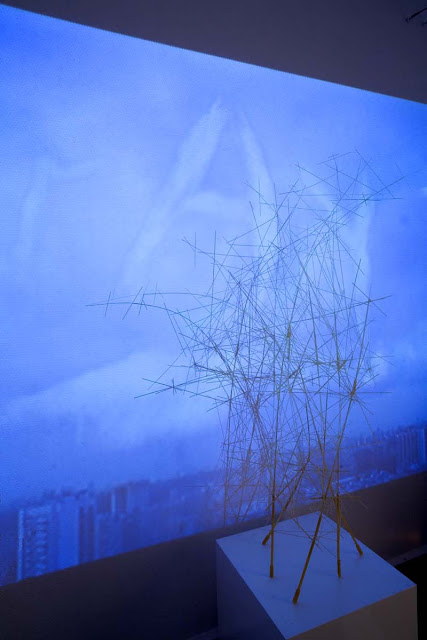 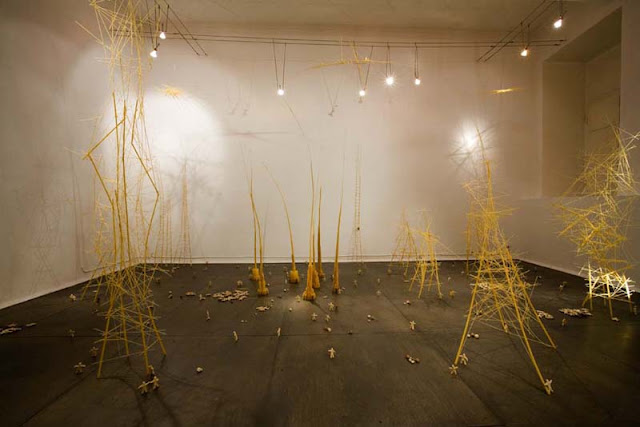 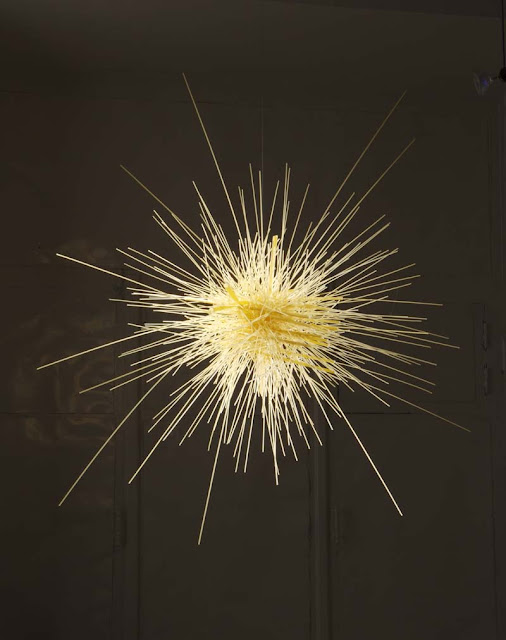 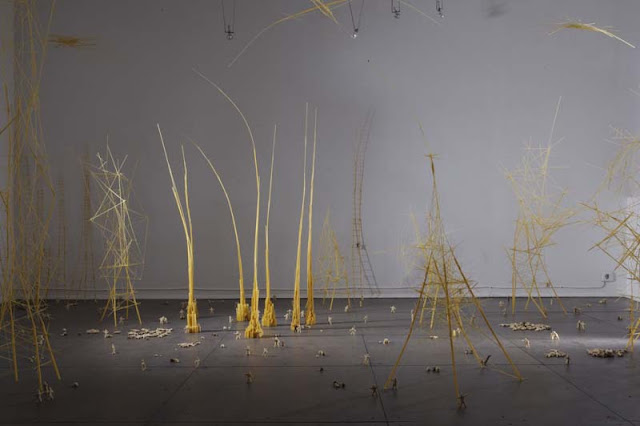 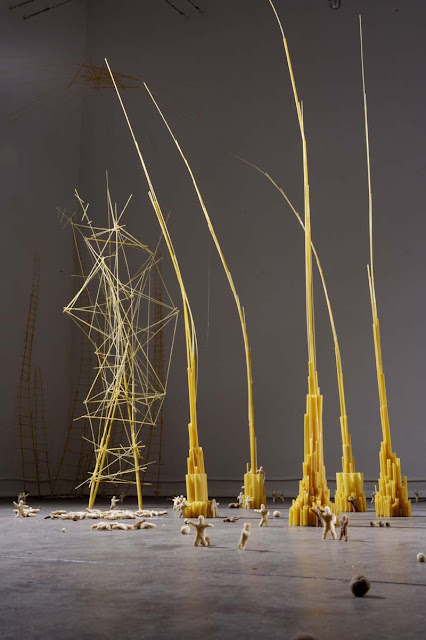 "Seven answers of Leonid Tishkov to the questions


by A.Petrovichev ( Krokin gallery) about the exhibition

AP Leonid, poetry is an essential element of your art. Are you focused on Khlebnikov at the moment?

LT I was surrounded by the poetry of Khlebnikov for many years and took a great liking to it. Khlebnikov isn't just a poet for me, he is an artist, in the full meaning of the word. Moreover, he is a product of art himself, his life is closely related with his creative works. I am deeply impressed with all the things he has said, written, or composed.

Is there much we need?
A slice of bread
A drop of milk
And all these clouds above
Are our salt

Everything that we see and that surrounds us, like bread, pasta or salt can be blessed with the genius of poetry. Velimir Khlebnikov was an ideal artist of the 20-th century. Many artists associated their creative works with his poetry. I had a video exhibit Solveig, which depicted the sky made of Velimir's salt. I have accompanied my kinetic exhibit Cicadae which is made of cocktail straws with a quote from Khlebnikov.

With golden of tiniest strings
A Grasshopper Bird weaved a nest of grass and hopes
On my breast
'Din-Din-Din', Zinziver burst out suddenly
And revived in me so soft memories!
So mildest delight!
Such sound of electronic engines together with lightest and thinnest cocktail straws, a wasted item, turn into live reflective reed. As Anna Akhmatova noted once:

If you could know
what shit the poems are made of
Would you feel ashamed?*

For me, any art is a sublimation of poetry, in the first place. We can show anything poetic and tactile through visual images? The more ephemeral the material the more likely it coincides with my understanding of poetry and life; I mean life as it is. The feeling that our existence is ephemeral and heavenly, and that everything is fragile and passing is one of the core topics in my art.

AP Does spaghetti go in line with this value category?

LT Absolutely. A side look will prove that pasta are rather poetic; they can be seen as a source for unspent poetry.

AP And how did you come across such a material?

LT Well it was like this, quite spontaneously, at first glance. The door of my kitchen cupboard opened, and a pile of spaghetti dropped down on the table. Immediately a very airy and unusual structure emerged. As an artist, I could not resist the urge and had to give it my full attention. The structure was so delicate, so architectonic! Kazimir Malevich would have described this structure as a colony of super type elements created by dynamic circumstances. And then, my narrative-and-poetry approach turned on.

I am only engaged into creation of poetic things. I have discovered, a very powerful image potential in spaghetti. This is because constructivism and futurism come from Italy, together with pasta. Philippo Tommaso Marinetti, founding father of futurism, comes from Italy, too. Pasta is a very futurism-like material.

I have studied the structure of pasta, and explored the links to pasta or spaghetti and art in Internet. In the Internet, they're appeared a slogan "Spaghetti is an art"! It turned out, that there were many books, surveys and researches about this. Cooks make so many recipes with this product!

Pasta is a common name for the product. There are spaghetti and pasta. After careful studies I was surprised at the compatibility of its diameters and length, as well as number of articles with different producers. I was surprised at the standards that exist for this product. It is really remarkable and mysterious! There is a global pasta mafia on the planet, as if an image of Global Government.

AP Nevertheless, Budetlyanin isn't a direct analogue with futurism. They have common idea, but different grounds and fuel.

LT Well, I transform the futurism idea into Budetlyanin one. My idea is more ideal, less mechanical or rational than that of the Italians. Russian Budetlyanins were missionary utopists. They were dreaming about an ideal future, they have invented a wonderful country Ladomir (Harmonious world). And I built Ladomir out of pasta. Ladomir is a world of dreams, it's an imaginary world. Pasta - what a wonderful material this is - to take it seriously? A material without any future? That's arguably for futurists, but evident for the Budetlyanins.

If you touch the exhibition accidentally, it would fall apart, and that's the poetic core. That's the core idea, that's the idea of a fragile cloud-castle, of their fiction. Archtectones appealing to Malevich works are mirages in this case. Everything is shadowy and phantom-like in the exhibit. We have staircases by Nikolay Fedorov leading to the sky, which are impossible to climb up for an ordinary person. But a soaring man can do so, he is that very resurrected Father. These radio towers receive radio waves of our souls. When we go to see the exhibition something starts vibrating in our souls.

The form as if spread all over the space resembles constructivism drawings or paintings by El Lisitsky. The form is completely speculative, it exists in ephemeral material. You can imagine that what you cannot build. It is imaginary country. That is why Ladomir poem surrounds the exhibit as a refrain or epigraph. Furthermore, I go into other things. As Khlebnikov wrote, Ladomir is a world of full harmony, there are people of different color, intentions, and beliefs living there. They come in, unite and create a new stunning world. It is wonderful and it is also splendid.

I think that the goal of the painter is to make the idea the Absolute. The others make their lives comfortable, but who is going to speak about ideal? So, Khlebnikov is an example for me, a priest of flowers, Gul Mulla, who goes along the desert carrying his poems in a backpack. There comes the night, he lights the fire, builds strange radio towers out of dry branches, to be able to transmit his poems to all of us, who have ever lived and also to the living.

AP You have sculptured 317 Khlebnikovs.

LT At Sometime, Victor Vladimirovich Khlebnikov created a formula, he derived that there should be 317 Chairmen of the Globe. He was one of the first to preach the unity of the whole world. My chairmen are made of bread, that's another metaphor, and rather complicated one. The bread is an archetypical thing, spaghetti is derivative from bread, either rye or wheat. There are 317 chairmen and they are situated everywhere in the gallery. Someone is sitting in an airplane and others are climbing up the staircase. It isn't the main thing. More importantly, they are made of bread and are prototypes of chairmen of the Globe mentioned by Khlebnikov. To be more exact, these are their souls, I name them Khlebnikovs.

AP So, the exhibit will have a big pasta theme?

LT My installation reminds of hypertext. New towers, new pasta shapes are added are growing like fractal, and the gallery turns into strange sparkling space. The material is so important here, it is a new esthetic approach, a principal application to the new, unexpected material, and to the new form. I am not a pioneer, both Americans and Europeans were involved into such creative work. Joseph Boyes, for example. For me, as well as for him, the poetry of the material is very important.

The modern art is poetical both in Russia and in the West. I am completely sure of that. An artist works both with the material and the text. The modern art is searching for the new plastics. It leaves conceptualism and practical things in favor of abstractionism. It starts seeing something new, formatted into post-conceptualism language. Exactly here the text is appearing. Therefore, pasta brings a lot of information. First of all, it is a product. People eat a lot of pasta. People work to earn money to buy food, work hard to eat well.

Suddenly, there appears an artist who builds post-constructivist object out of pasta instead of eating it (real Italian one, rather expensive, buy the way). Why? It is kind of light version of criticism of consuming, though not involving deconstructions. It is full of ephemeral, dematerialization, and devaluation of the social function, to put it my way. This is actual both worldwide and Russian-style. We are not even sure how to utilize spaghetti after the exhibition. What shall we do with it? Just throw it away, or distribute between low-income people, may be.

AP The West if reflecting, while Russian artists thinks in ideal categories, right?

LT Nevertheless, I understand myself as an International artist, I don't put border in this respect, and I find similar-sounding artists in different cultures. Division into the artists of plastics or critically minded artists, or symbolic-minded artists is not topical today. I fell in common with Ilya Kabakov, for example. A Case in the Museum. My bread figures are kind of tribute to this artist. For him also an involvement by the spectator in the exhibition is very important. Together with him, I believe that is it important for the visitor to be involved in the exhibits as a co-creator, and not just to passively wander around.

Shared emotions and shared visions enter into this world of towers, staircases, monuments, the world of pasta in my case, is important. However visitors should be very cautious, as exhibits are so fragile. The visitor's can quite easily becomes one of the inhabitants of Ladomir. They should be very delicate and cautious to be able to live in the reality of sparkling, dough and tube mass.

Look Homeward in Another Mythology 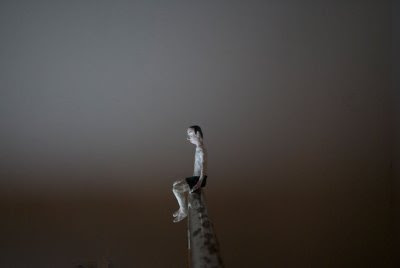 We leave home and come back Home. Everything remained
the same in that house as when we’d left it and yet everything
was different -- it was illumined with the light of eternity, the
light of universal farewell. In this world of eternal returns any
phenomenon of the present carries within itself the past and the
future, that is the eternity itself.

Everything here, at the edge of the eternity, becomes a
symbol and is multiplied through similarities, as a crystal in
its matrix, in the solution of its soul, becomes overgrown with
its past experiences and turns into a magic creature capable of
expressing its secret thoughts about the subconscious events of
its innermost life, in the language of the objects from the external
world. Thus the artist spins a thread out of the formless cloud of
being, twisting it round the spindle of his imagination to create
his mythological world.

I’m returning Home where the walls are transparent and the
ceiling is pierced with stars while inside everything is timeless,
even sacred for the home-comer: the bed covered with a bedspread
of light, a pair of heavenly skies, a wardrobe inhabited by various
creatures, a loaf of bread sleeping on the table, and the twin salt
shadows on the floor.

Under the bed lies the same knitted rug my mother had
made out of strips of my old clothes. It was a kind of placenta
from which the fetus of my unconscious wooly life received its
nourishment.

Father and mother, who blended into a single father-mother
for me now, look at me from the depth of an old felt boot. And here
is myself striving skywards but not yet a heavenly diver who had
been shaped by all those living with me at the edge of Eternity.

Having become a “Knitling” I emerge from my personal
space as if from the forest and elevate my personal fate towards
that of humanity; I become a knitted Urals Golem and assume an
archetypical form.

And already I am speaking with a thousand voices as I lift
what I have depicted from the transient one-time world into the
sphere of eternity. 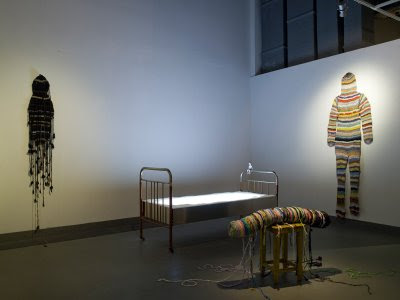 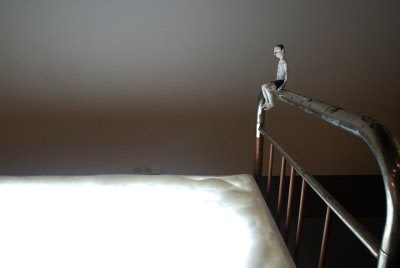 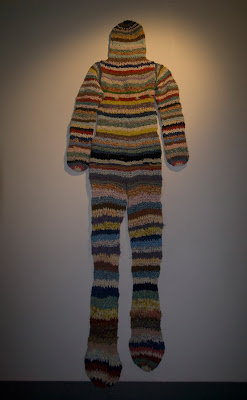 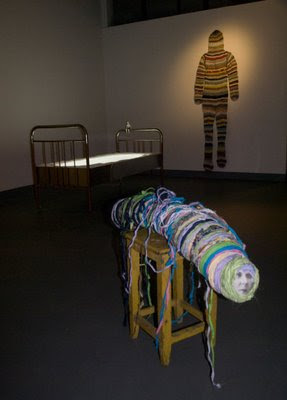