Living In a Trunk

Living In a Trunk is almost a Chinese story, drawn in Indian ink. It tells about a frightened rabbit, about how standing next to person there is always something Huge. Maybe it's God, subconscious, eternity or the power. Sometime you think something is folloving you in your sleep - don't be afraid: it's only an elephant and you - his trunk. This is your world, from which you can't leave. You don't even want to give up this world. In the trunk it's warm and damp. You lie there naked, but it's safe. It's haven, the mother's womb in which the infant hid. Be happy as a trunk: two tusks protect you, two tiny eyes always follow you. Tomorrow the elephant will show us a valley of violets and how to pick bananas. Living In the Trunk is the Little Prince of Sant-Exupery, in which the person and elephant can't live without each other, and each dreams about freedom, forgetting about the rose of love. 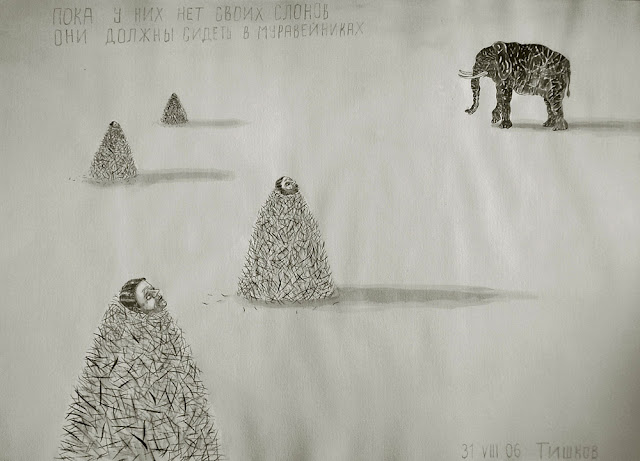 While they haven't their own elephants they must sit in anthills 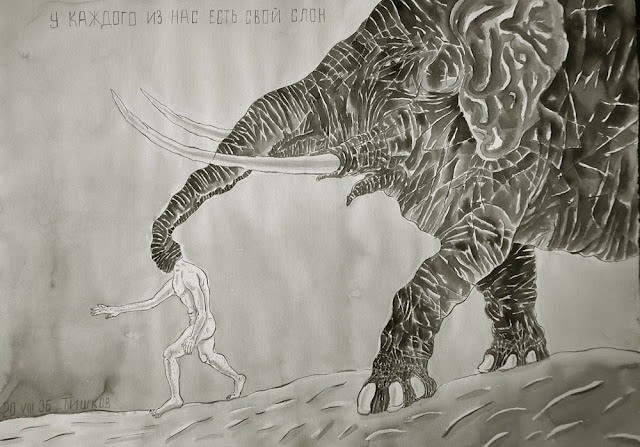 Each of us has own elephants 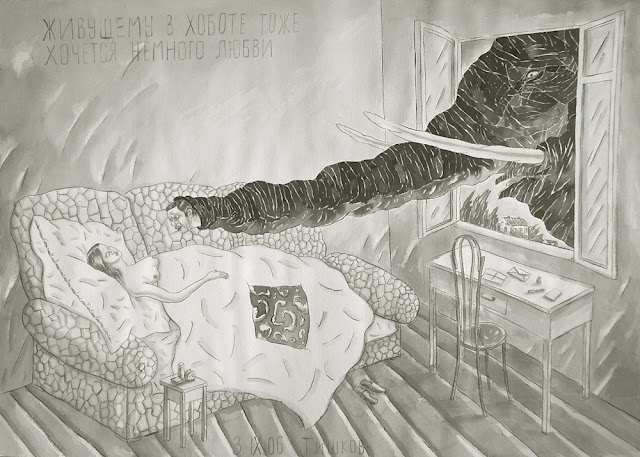 Living In a Trunk also wants a little love 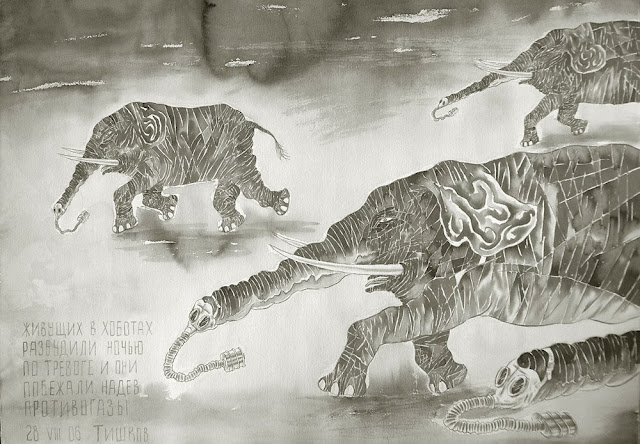 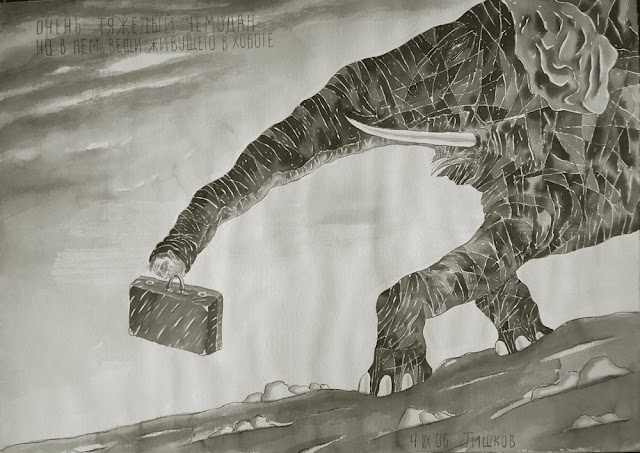 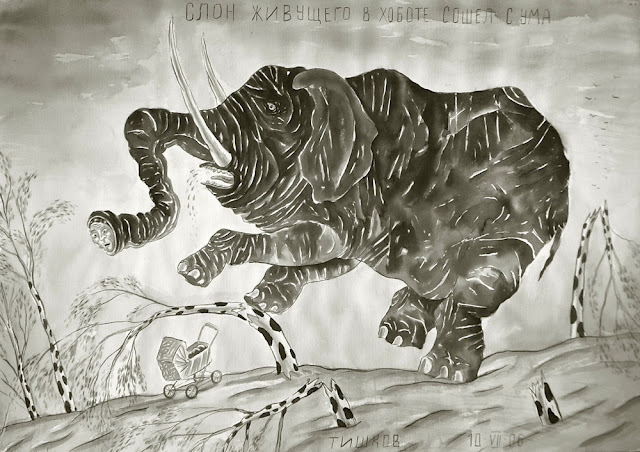 Living In a Trunk's elephant went out of his mind 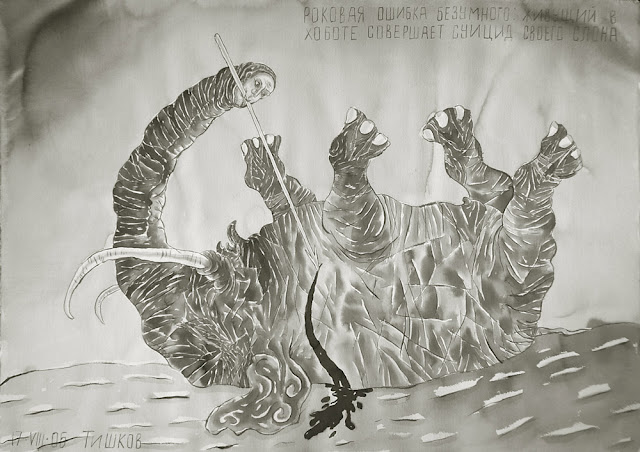 Fatal mistake of a lunatic: Living In a Trunk commits the suitcide of his elephant 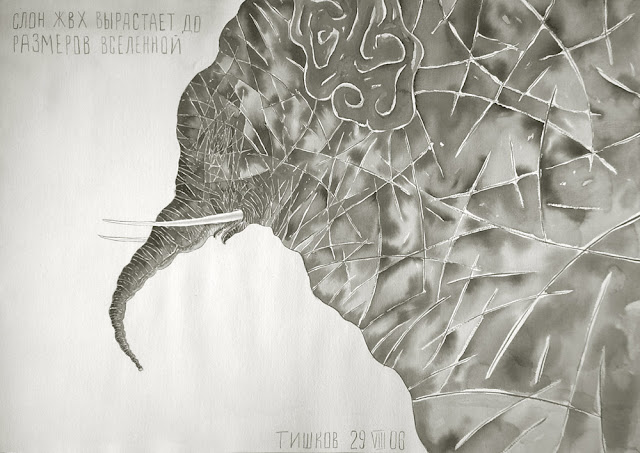 L.I.T.'s elephant grows to the size of the universe 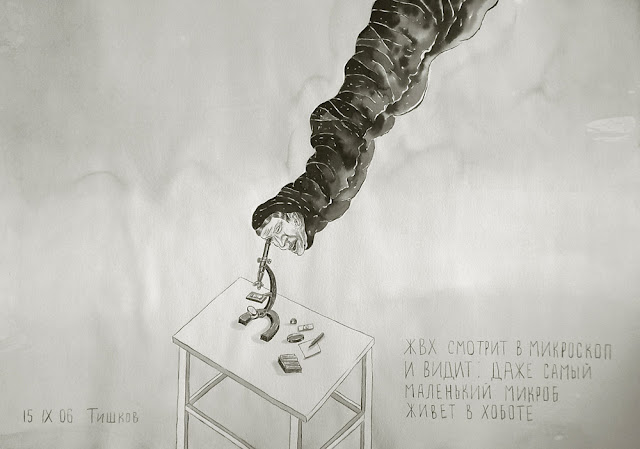 L.I.T. looks in microscope and sees: even the smallest microbe lives in a trunk 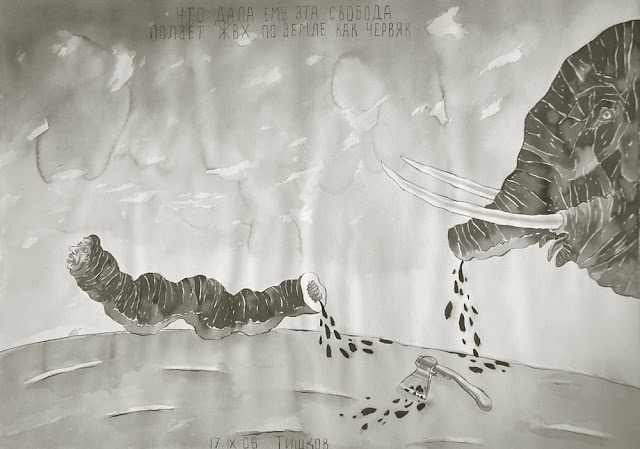 What has this freedom given him L.I.T. crawls along the ground like a worm 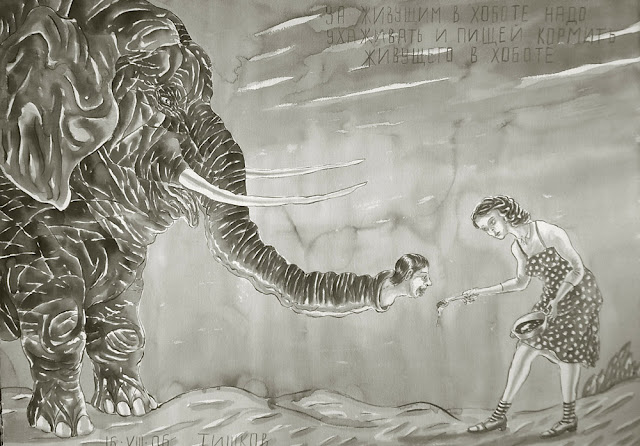 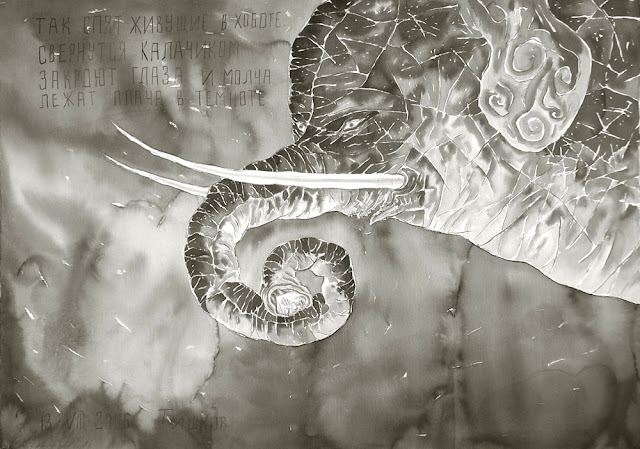 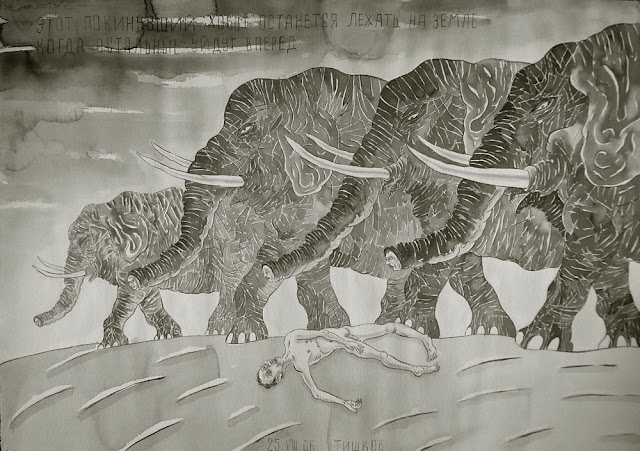 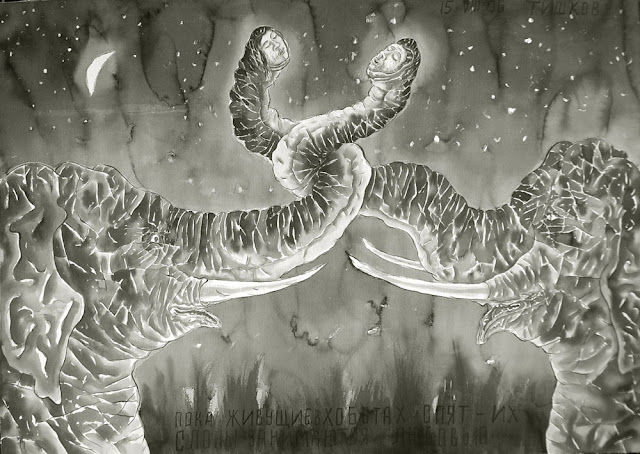 While Living In a Trunks sleep their elephants are making love
Ярлыки: living in a trunk, works on paper 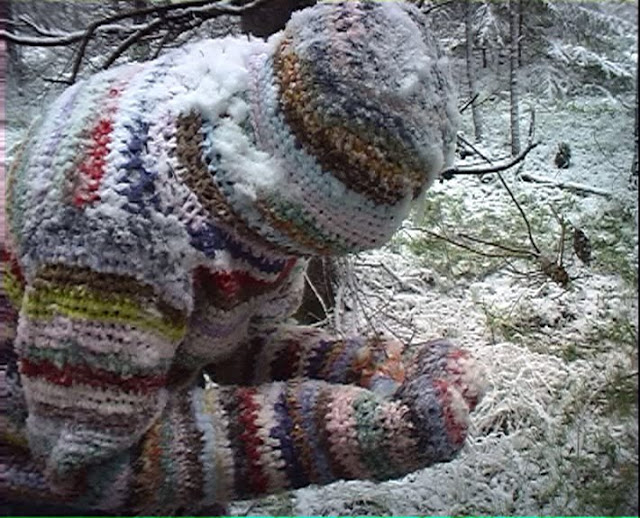 "Knitted in a homely fashion in stripes of multicoloured wool, a bodysuit - one that covers the entire head - hangs forlornly against the gallery wall. It's the handiwork of the mother of Leonid Tishkov, one of five contemporary Russian artists featured in an exhibition that delves into myth, memory and family lore. Next to it there's footage of the besuited artist blindly prancing around on a rooftop, looking down upon a grey urban Soviet-era sprawl. 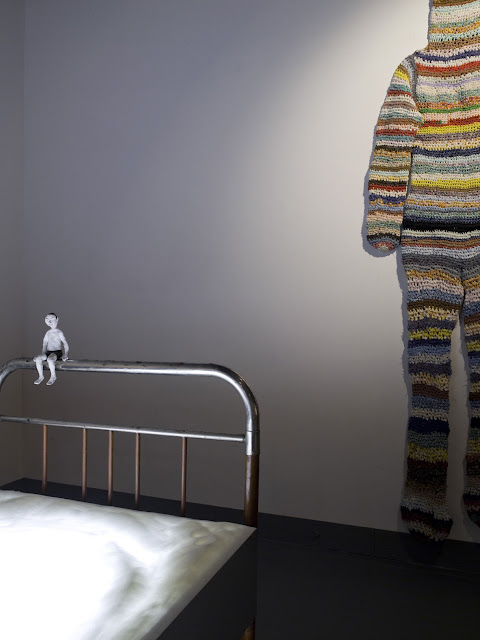 Tishkov's work, which also includes his childhood bed - a lightbox has replaced the mattress and a miniature figure of the artist perches on the rusted iron bedpost - captures something of the mood of much of the rest of the exhibition, in which we see a craft-based folksy aesthetic knitted to a conceptual sensibility. A certain playfulness vies with a prevailing melancholy. 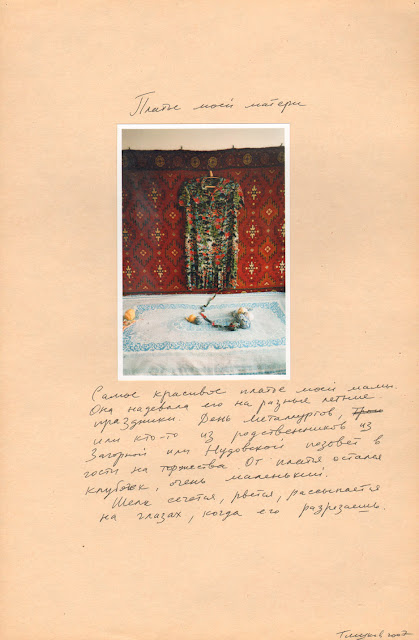 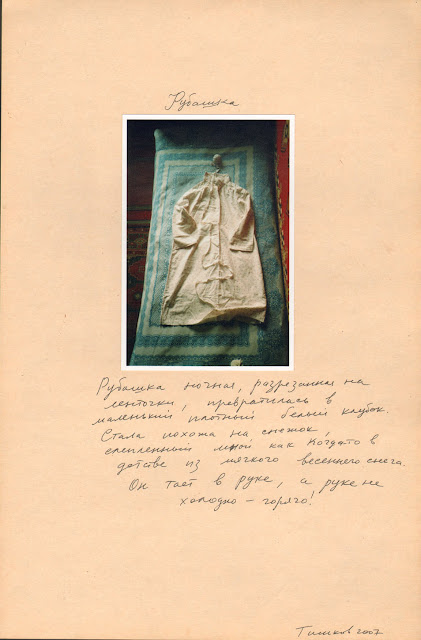 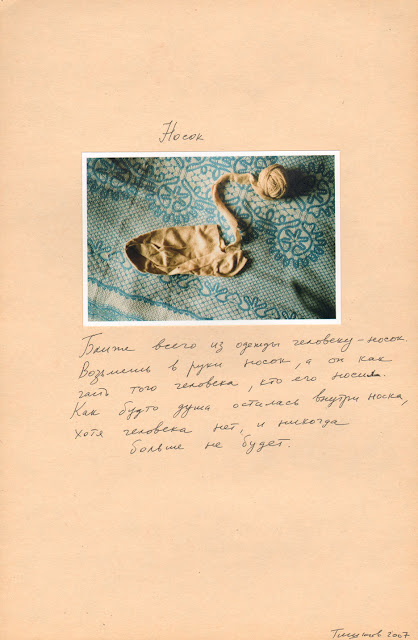 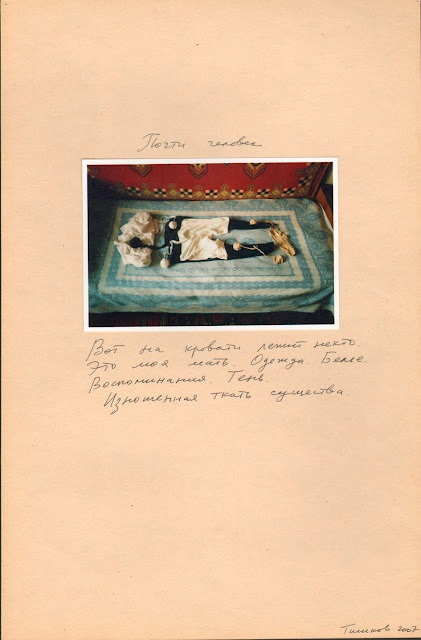 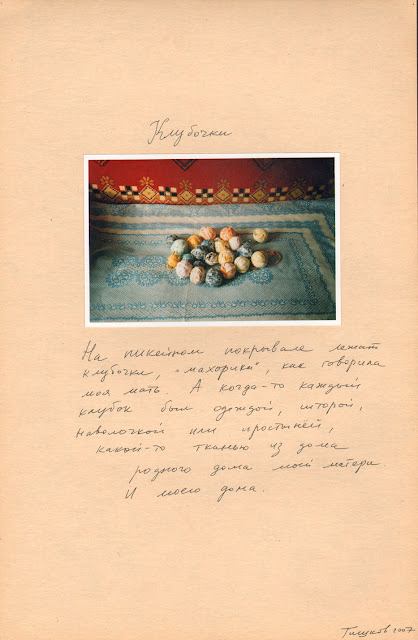 After my mother’s death I was left with her clothes: dresses, scarves,
blouses, underwear. The forlorn dresses hung in the wardrobe, all silent
on their wooden hangers. One of them was a conservative black woollen
dress of a primary school teacher. Another, colourful one of crepe-de-
Chine, was the one my mother used to wear for more festive occasions.
What do to with all that had been left over after she herself had passed
away? Recalling how my mother had shredded the old clothes into even
strips to make carpets out of them, I also cut her dresses into nice even
shreds – an endless ribbon – and spooled them into balls one after
another. I cut everything into ‘fringes’ as my mother used to call them.
Thus the clothes were dematerialised, converted into balls that are like
the atoms with electrons inside, atoms that contain the nucleus of the
matter. „What beautiful material – I shall make a dress of it for myself”,
had my mother said. The word ‘dematerialise’ seems to contain both
words ‘matter’ and ‘мать’ (‘mother’ in Russian, pronounced [mat]).
And as a result all that was left were the shadows of the dresses on the
walls, bare hangers on nails, heartache and a velvety photo album. And
many colourful atom-balls that now make up my reality, home of silence
upheld by love and memory.

"I Was Russia" exhibition at Dunedin Art Museum New Zealand 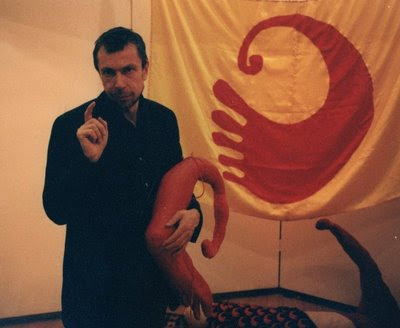 I Was Russia
Starting Date: Saturday, 6 June 2009
Finishing Date: Sunday, 6 September 2009
Curated by Marcus Williams (New Zealand) and Konstantin Skotnikov (Russia) this exhibition brings together for the first time in New Zealand a rich collection of works by some of the most influential figures in Russian art today. I was Russia promises to be a visually rich and intellectually stimulating exhibition that will provide a unique insight into this burgeoning contemporary art scene. It showcases the work of the internationally renowned artists Alexander and Olga Florensky, Oleg Kulik, Leonid Tishkov, Dmitry Bulnygin, and the influential art collective Factory of Found Clothing and Blue Noses Group.
http://dunedin.art.museum/exhibitions.asp?p=2
No comments:
Ярлыки: dabloids, exhibition
Newer Posts Older Posts Home
Subscribe to: Posts (Atom)